Evaluation of Water Analysis: Is it’s Quality Suitable for Irrigation? Posted at 11:39h in Irrigation Water by Jackie 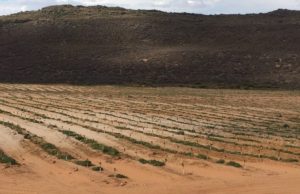 In the light of decreasing availability of water for irrigation, producers are compelled to investigate the possibility of using water sources previously not considered, i.e., boreholes or wastewater. The quality of these sources often raises concern, making producers unsure whether they can rely on them for long-term crop production or new developments.

In this document, the most common factors that determine whether water is suitable for irrigation, as well as possible mitigation options, are discussed.

The first quality parameter that must be considered is total dissolved solids (TDS), which is a measure of the total quantity of various inorganic salts dissolved in water.

Interpretation of the total salt content of water is done, using a scale of EC values – the higher the EC, the less suitable the water becomes for crop production. Different EC ranges are used to classify the water’s quality – the different classes that are internationally used as an indication of the water’s suitability for crop production are provided in the table below. The EC, however, does not indicate the type of salts that are present in the water.

Even though the water’s total salinity places it in salinity Class C1, C2 or C3, it can still be unsuitable for irrigation due to disproportionately high sodium (Na) in the water. In addition to being a salt that can be damaging to plant tissues in extremely high concentrations, Na is harmful to soils since it displaces Ca and Mg on clay particles which results in clay dispersion and breakdown of soil structure. A decreased water infiltration and/or drainage, with an exponential increase in the rate of salinification of the soil, is the end result.

Irrigation water analysis reports will therefore often contain a so-called “irrigation class”, which is expressed as “C…S…”. For example, highly saline water (EC > 2.25) with a low SAR (<5) will be classified as C4S1 water. From the tables above, these classifications can therefore be interpreted.

When the pH of irrigation water exceeds 8.0, a useful alternative measure of the risk that sodium poses is the residual sodium carbonate (RSC) index. In this index, the bicarbonate (HCO3–) and carbonate (CO32-) concentrations in the water are brought into consideration. The logic being that precipitation of soil Ca and Mg with HCO32- and CO32- in the irrigation water subsequently leads to an increase in the relative proportions of sodium to the other cations in the soil solution. This situation, in turn, will increase the sodium hazard of the soil-water to a level greater than indicated by the SAR value of the irrigation water. A high RSC of irrigation water, therefore, results in an increase in the soil’s exchangeable sodium percentage (ESP), with the consequent dispersion of clay, as referred to above.

In arid and semi-arid regions underground water often has a high pH and RSC. The higher the pH of the water, the higher the HCO32- and CO32- concentration will be, with a progressive shift towards CO32- as the pH increases, leading to clogging of irrigation systems. The guidelines below can be used to assess the risk of drip irrigation systems becoming blocked due to calcite/lime deposition.

The following indicates the suitability of water for irrigation on account of the RSC index (meq/L):

From the above tables, it is implicit that while it is possible to use a wide variety of water quality types for irrigation, management procedures become more demanding as the water quality decreases – the suitable range of soils and crops also become more restrictive. The possible management options to prevent the build-up of salt in the soil, and ensure long-term crop performance, are:

Soil drainage: To avoid the build-up of salts, the soil must be permeable – permeable soil can be leached to wash out the salts. In this regard, sand is much more forgiving than heavy soil.

Leaching: Salt build-up in soil is avoided through leaching. Through regular monitoring of salt levels in the soil (measuring the soil’s EC or resistance), the need for leaching (or its effectiveness when practiced) can be determined. Generally, the higher the salt level of the water, the more arid the climate, the greater the leaching requirement will be.

Irrigation frequency and duration: Irrigation scheduling has a huge impact on salt accumulation or reducing levels in the soil. Short, regular cycles will more likely result in salt build-up in the topsoil because of evaporation.  On the other hand, long cycles leading to deep penetration of water, mitigate the build-up of salts in the plant root zone.

Soil and water amelioration:  Irrigation water can be modified with gypsum to improve its SAR. The quantity of gypsum needed for adding to irrigation water depends upon the quality of water (the SAR and RSC) and the quantity of water required for irrigation during the growing season of the crop. The addition of gypsum increases water salinity, so this is only an option when the water’s salinity is not too high, and when the soil is well-drained. Soils can also be modified using gypsum to ensure proper drainage (it helps to maintain and improve the soil’s structure), but this should only be used when the soil’s exchangeable sodium percentage exceeds 10% – otherwise, the soil is actually further salinified.

In this information sheet, only three water quality parameters were discussed, i.e., total salinity, SAR, and RSC. These are regarded as the most common restricting factors. Water quality problems can also be associated with the presence of other constituents, like excessive levels of iron (Fe) or manganese (Mn), that can result in drip irrigation being blocked. Crust formation that typically occurs on the surface of soil that is irrigated with water that has a high RSC index or an excessive SAR – the result is excessive run-off, i.e. poor water infiltration