The Concept of Cation Exchange Capacity

Posted at 09:04h in CEC, Soil Analysis by Jackie

The cation exchange capacity (CEC) is a property of a soil that describes its capacity to adsorb plant nutrient cations (positively charged atoms or molecules such as Ca2+, Mg2+, H+ and K+). 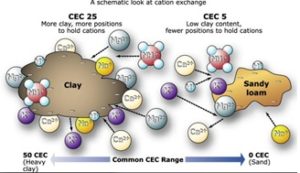 Soil clay minerals and organic matter tend to be negatively charged, thus attracting the positively charged ions (aka cations) on their surfaces. As a result, the cations remain within the soil root zone and are not easily leached. The adsorbed cations may easily exchange with other cations in the soil solution, hence the term “cation exchange.” The adsorbed cations replenish the ions in the soil solution when concentrations decrease due to uptake by plant roots. CEC should not be confused with T-value. Soil analyses results often display a T-value, which is the sum of ALL exchangeable cations, including free (in solution) cations and those on the exchange sites. The T-value is therefore often larger than the CEC.

*If you wish to have your soil CEC measured you will have to ask the lab specifically at an extra cost.

Soils dominated by clays with variable surface charge are typically strongly weathered. Weathering is the process whereby soil is formed as rocks and minerals break down. The fertility of these soils decreases with decreasing pH which can be induced by acidifying nitrogen fertiliser such as ammonium sulphate [NH4(SO4)2]. As nitrate-nitrogen (NO3–) is taken up by plant roots one hydroxide (OH-) molecule is produced. This binds with one hydrogen (H+) molecule to form water (H2O). Nitrate is an anion (negatively charged ion) and can easily be leached from the upper soil layers because of over-irrigation and soils will slowly acidify over time. Clearing vegetation or harvesting of high yielding crops like wheat also removes basic cations, which will increase soil acidity over time. Soil pH change can also be caused by natural processes such as decomposition of organic matter and leaching of cations by rainfall. The lower the CEC of a soil, the faster the soil pH will decrease with time. Liming soils at low rates will maintain exchangeable plant nutrient cations. High CEC soils are generally well buffered, and pH changes much less from crop production. Higher lime rates are needed to reach an optimum pH on high CEC soils due to their greater abundance of acidic cations at a given pH.

Soils with a low CEC (1–5 meq/100 g, sand) are more likely to develop deficiencies in K, Mg and other cations, while high CEC soils (>30 meq/100 g, clay) are less susceptible to leaching of these cations. For plant nutrition, the critical factor is whether the net amount of Ca or K in the soil is adequate for plant growth. The addition of organic matter will increase the CEC of a soil but requires many years to take effect.

With large quantities of fertilisers applied in a single application to sandy soils with low CEC, loss of nutrients is more likely to occur via leaching. In contrast, these nutrients are much less susceptible to losses in clay soils. However, as low CEC soils are poorly buffered, a single application of high amounts of fertiliser will cause the EC (salt content) of the soil to spike and may cause root damage to citrus trees. This is especially prevalent in older citrus orchards with a shallow root system. During late winter in the Western Cape when soils are cool, root activity is low, and the uptake of nutrients are reduced. Root damage due to successive fertilizer applications during periods of slow uptake may cause minimal to severe leaf drop. Therefore, it is important to split fertiliser applications and wash in the fertiliser properly to the correct depth.

In the case of old citrus orchards with shallow root systems, it might be necessary to start slowly with fertilizer applications and increase applications gradually as temperatures and uptake of nutrients increase once trees become more active.